A short history of Shohola Pennsylvania and the Seal :
The Village of Shohola was settled in 1772. The 45 square mile township, extending from the Delaware River to Route 6 was formed on September 26, 1852.

While there were only a few farms in the area at first, growth began with the coming of the Erie Railroad in 1848. Seven years later, a bridge was built, replacing the ferry which connected Shohola with Barryville and the Delaware and Hudson Canal.

Boarding houses, which where once a rather large industry in Shohola, where replaced by vacation houses and these are being replaced by permanent residences.

Approximately one-third of Shohola is owned by the Commonwealth of Pennsylvania, with the Township containing a portion of the Delaware State Forest and sections of three state gamelands.

The seal of Shohola township consists of a map of the Township with the four main bodies of water – Walker Lake, Twin Lakes, Delaware River and Shohola Creek, and the four state roads that lead into the township – Twin Lakes Raod, Lackawaxen Road, Shohola Road (Route 434) and GAR Highway (Route 6). The two stars represent peace and tranquility, translations of the word SHOHOLA, as the Native Americans originally applied it to the peaceful, tranquil Shohola Creek. The Date 1852 was the date that the Township was legally formed. 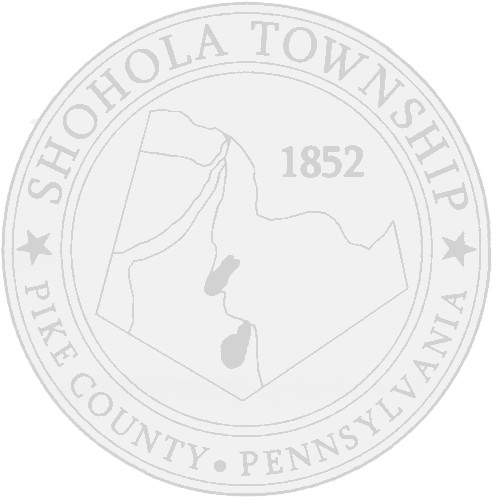 Zoning Office Mon and Wed only from 8am to 12pm

Building Office by Appointment Only